I have been a teacher for 31 years, a head teacher for 16 years and, at the age of 55, this much I know about the challenges for early career headteachers: understanding change management. 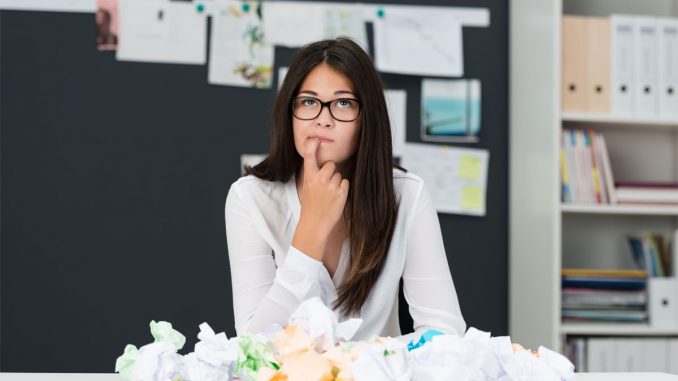 In this current series of short blog posts, I am addressing each of these challenges and providing some tips which might help early career head teachers to meet them. This post explores, understanding change management.

I had little idea about how to conduct change when I began my first headship. I made a cataclysm of errors (my choice of collective noun) in the first few years of leading a school. Some of my mistakes related to change management have already been catalogued in previous posts. Certainly, the misguided sense that more is more was at the heart of my naive approach to enacting change.
The thing is, less is more, always. School Leaders invariably feel safe when we have lots of plans to demonstrate the efforts we are making to improve our schools. In the past I have been horribly guilty of thinking more is more!
My first School Development Plan as a head teacher was a beast, only portable by supermarket trolley. When I presented it to the Governing Body the meeting was on the first floor and my PA Rosie and I, with 20 copies of the thing to carry, had to take the lift. It had 38 development initiatives. I wasn’t interested in getting a few essential things right I wanted to get everything right straight away.
That Governing Body meeting where I presented my first plan (of course it was mine – I had to prove myself as a head teacher and there was no way anyone else was going to tell me what to do) lasted until 11.30 pm: not only did I circulate hard copies of my SDE (School Development Encyclopaedia) I had 127 Powerpoint slides (of largely text copied verbatim from the SDE itself) to help me tell Governors what we were going to do over the next year.
It was great. I loved it. I gained some odd satisfaction from the strain and pain of giving birth to the thing, the weekends spent typing the beast up whilst my wife and kids entertained themselves; an absent father in the next room. And I had no idea how I was going to measure whether what I had planned had worked.
Looking back now, it’s embarrassing to think of that first development plan. But the culture of fear breeds backside covering amongst early career head teachers. It’s really easy to implement extensive interventions in an attempt to raise headline results figures just so that you can point to how much you did to improve results when the results turn out to be disappointing in August. I know the results are rubbish, but we worked really hard – look at all the things we did…
And then there is the difficult challenge of realising just a single specific change. What I did not understand is just how difficult it is to enact what seemed to be even the simplest alteration to practice within a school. Teachers and schools are conservative places. Change is rarely greeted with enthusiasm. And if you have 112 teachers and 70 support staff in a school, like we do at Huntington, ensuring that a change to practice is implemented with 100% fidelity is a huge challenge.
So, if you are new to headship and are preparing to implement changes to the school you lead, here are my top five tips for early career head teachers for understanding the change process:
1. Know where you are on the Sigmoid curve. Whenever an organisation implements change there is a general pattern of development explained by Sigmoid Curve analysis, shown in this first diagram:

The key issue is when to introduce the next phase of change, explored in the second diagram: 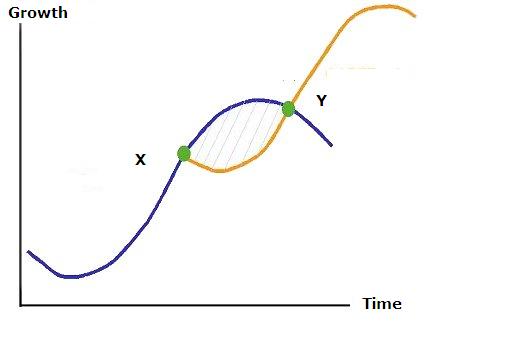 You want to reach point Y on an upward, not downward, trajectory; but when can you tell that it’s time to jump off the first curve? Riding the first curve while cultivating the second is always the best option; clinging to the first and trying to prolong it is a pointless waste of energy. When all is well and you are at the top of your game, then it’s probably the time to plan your next curve.
I have recently asked our SLT where they think Huntington is on its Sigmoid curve. The numbers indicate how many of us think we are at those specific points on the curve. 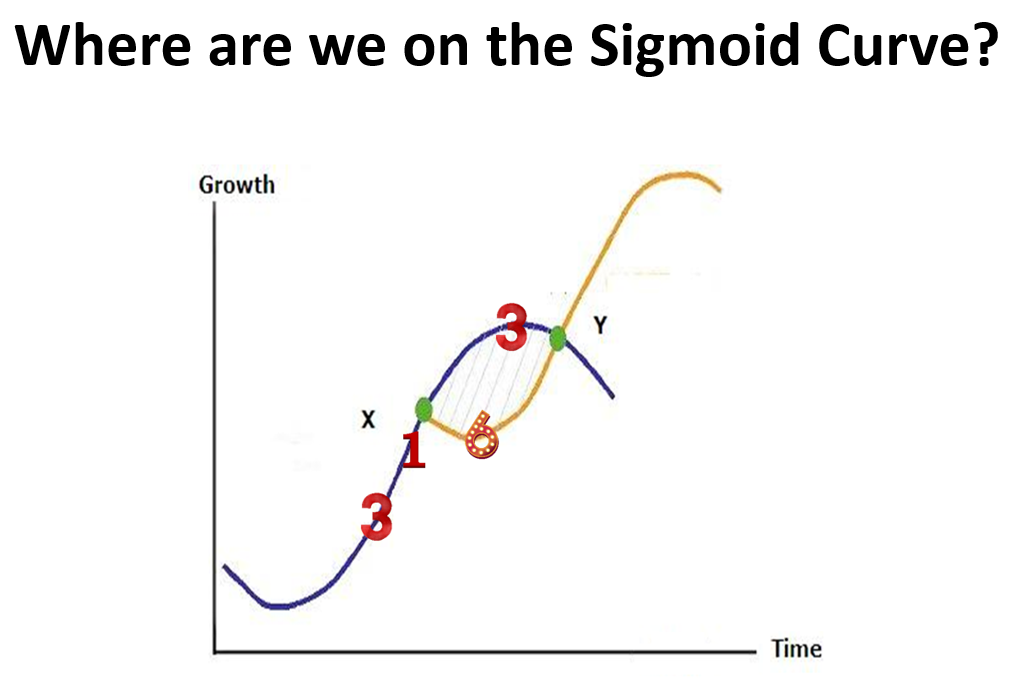 2. Get a few essential things right. Sir Tim Brighouse’s The jigsaw of a successful school is sharp stuff and required reading for all early career headteachers; it embodies the principle of keeping things coherently simple. In his introduction makes the following observation about change and school improvement:

…whenever I’ve visited a school, which has recovered its sense of direction and pride after falling on hard times…I ask the (usually new) head teacher, “Well, what did you do?” The reply is always the same. Whatever the head teacher’s style, whether understated and calm, cool and determined or outrageously busy, the reply usually contains the phrase: “Well it’s not rocket science. We just concentrated on getting a few essential things right”. [1]

“…getting a few essential things right.” Just let that phrase sink in.
It depends where you are in the development cycle of a school, but wherever you find yourself on the development cycle, pare down your change priorities and do a small number of things really well. Easier to say than do, perhaps, but school improvement is not hard as long as you keep it simple and focused on what matters.
3. Learn about the change process. One book that helped which I read before I began was Leading in a Culture of Change by Michael Fullan. Another publication from the Canadian leadership guru, The Six Secrets of Change, I have found hugely useful. My leadership of change at two schools has taught me many things, most of which Fullan articulates in his book Leading in a Culture of Change.[2] His six secrets are not secrets any more – since he’s published them – and I’m not sure they ever were; I think they are common sense:

So much of what Fullan says here I discovered the hard way, through first-hand experience; perhaps one has to live through professional strife before one can accept that Fullan-style wisdom is true.
4. Look to the commercial world. I have never desired to be a business man, but I do, however, learn from business practices. A few years ago I adopted what’s called Blue Ocean Strategy in order to have a structure for implementing change. We spend more time now thinking about how we implement change than what that change might be. Implementation is woven into our planning, not an afterthought. It works brilliantly and has helped us improve teaching and learning no end. The nub of our Blue Ocean Strategy implementation process is outlined in the slides available below and a Bill Bratton Tipping Point pdf.
[scribd id=435282553 key=key-vQERSQTVSGyDWfNsYXpw mode=scroll]
5. Keep learning about implementing change. Most recently, Professor Jonathan Sharples authored an EEF guidance report on how to plan the implementation of your interventions entitled, Putting Evidence to Work – A School’s Guide to Implementation. It is essential reading for all school leaders, and I don’t say that lightly. It is a game-changer, as far as I am concerned. It introduced me to the concept of implementation activities; that is, activities which you detail in your planning which help ensure that the enacted change is as faithful as possibly to the change you planned. The idea is outlined here in a series of slides, where we identify the issue – in this case, a curriculum issue – then go to the desired outcome, then detail the change required, then identify the implementation activities in all their prosaic dullness, and then finally envisage the outcomes of the implementation activities. I promise you it works. 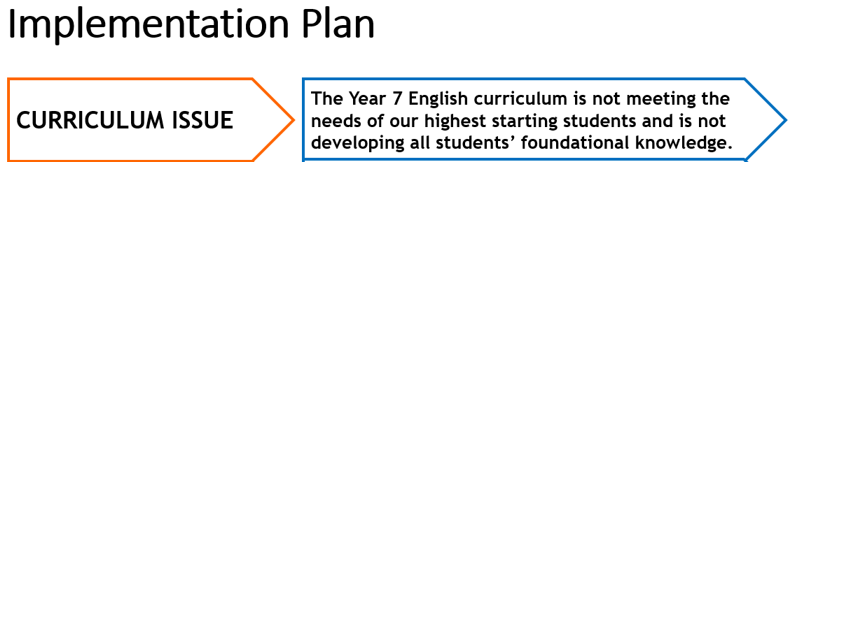 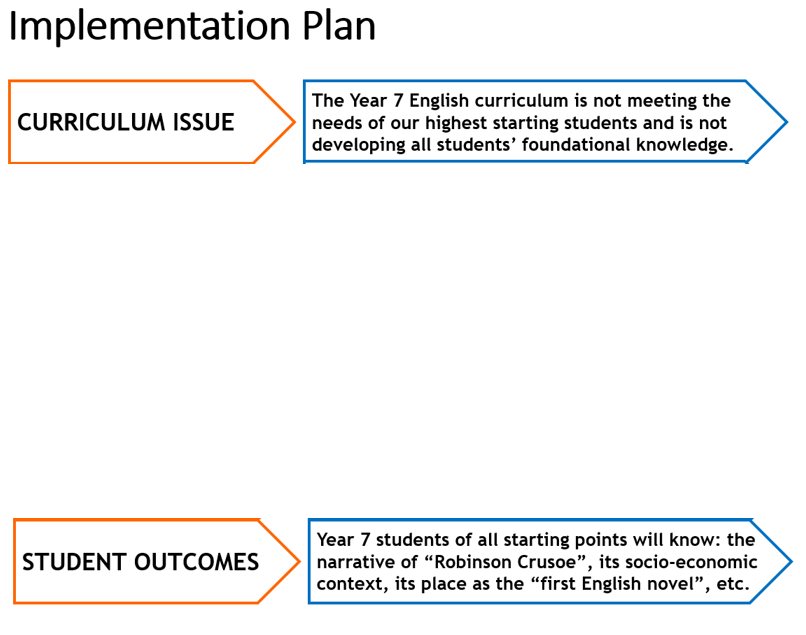 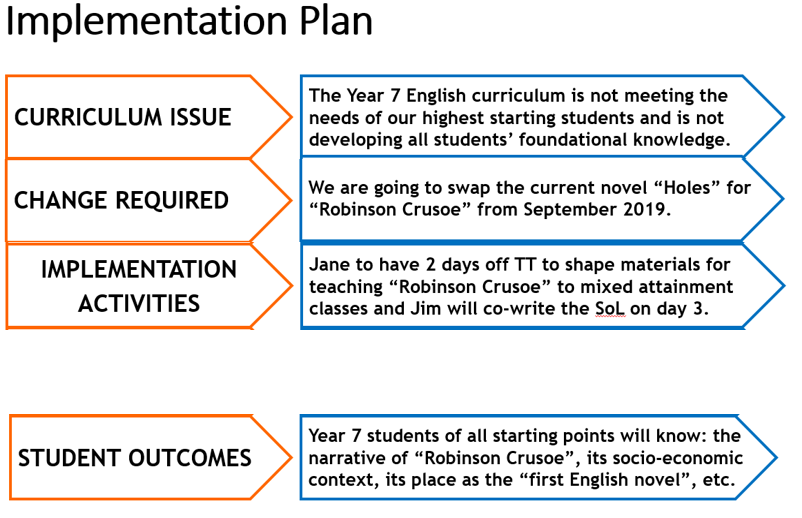 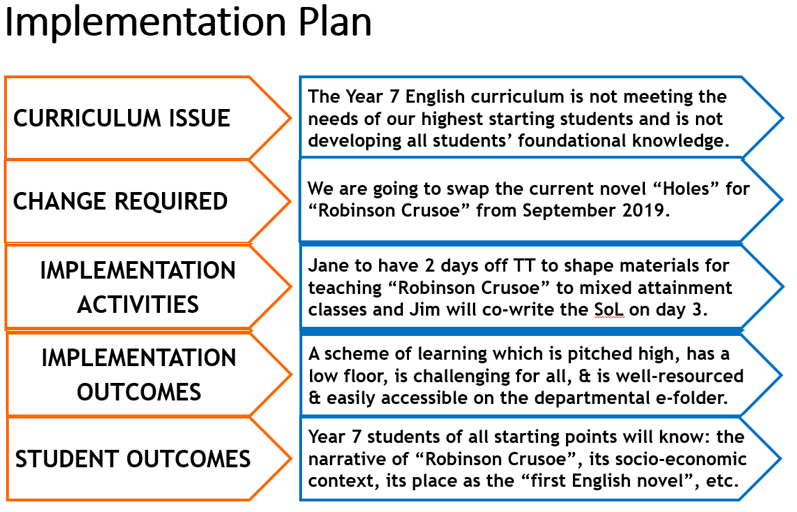 In January 2018 we used this approach to implement seven months of preparatory work on improving the progress of our most vulnerable learners. Eighteen months later, for the first time, our disadvantaged Year 11 students had a positive overall P8 score and their P8 score for Ebacc subjects was +0.22. Still not as good as we wanted, but in a school where 92% of our students are from a white British background, it is a respectable outcome.
And if I was allowed a sixth tip, before you implement, carry out a pre-mortem. I always anticipate what might go wrong. It’s safer that way, and I can only be pleasantly surprised when my pessimistic anticipations do not materialise.
At Huntington we have formalised such pessimistic thinking within the implementation of all important strategic developments we undertake. After we have completed our Blue Ocean Strategy analysis, and identified our implementation activities, we undertake a pre-mortem. Instead of working out what caused a development to fail after it has failed as we would in a post mortem, we assume it has already failed before we have begun and try to predict what would cause such failure. Once we have established what might cause our developments to run aground, we agree a list of actions to prevent such an eventuality.
Our pre-mortem idea derived from an article by psychologist Gary Klein.[3] He cites research by Mitchell, Russo and Pennington which found ‘that prospective hindsight – imagining that an event has already occurred – increases the ability to correctly identify reasons for future outcomes by 30%’.[4] Klein devised his pre-mortem, the distinctive feature of which is the assumption by the team that the development has completely failed.
Psychologically, this assumption of total failure allows members of the team to speak more frankly than if they were merely thinking about why the development in question might not work. This sense of what has happened instead of what could happen helps the team visualise the assumed failure with greater clarity. The team gains a similar lucidity when hypothesising about why the failure happened.
We used the pre-mortem technique when implementing our new Pastoral structure. Our write up of our discussions began, ‘It’s July 2016 and the Pastoral Review has failed to deliver on any of its objectives’. We created a table on one side of A4 which had three headings: