I have been a teacher for 32 years, a head teacher for 17 years and, at the age of 56, this much I know about why teachers need to have interests away from work.
I have just had my pacemaker replaced. It was a brutal affair; I know that because I was wide awake throughout. Ripping the old one out, after 12 years of fibrous growth had embedded it in my chest, took some doing. There is nothing quite like listening from behind your Covid-19 protective sheet to the surgeon muttering “bugger” and “crikey” to make you feel the full force of your mortality. At one point my legs began to shake involuntarily when he told me he was trying to avoid puncturing my lung. I was in the best place if he did, I was reassuringly informed.
The experience made me glad that I don’t spend all my time worrying about work any longer. That said, since 20 March I don’t think I have worked quite so hard or worried quite so much about school. I have merely chosen to not be overwhelmed by the responsibility of leading Huntington, and my operation has only reinforced the wisdom of that choice.
For the past two years I have managed to find the occasional corner of the weekend to write 500 words of my next book…on fishing! It is called The Anglers’ Diary 2021, to be published in time for anglers’ Christmas stockings! I finished the first draft this very morning. It constitutes 53 short tales from my lifetime of fishing escapades, one for each week of the calendar year; I even have an illustrator, Marvin Huggins, to ensure it’s dual coded!
To give you a taste of the book, here’s a tale where fishing and teaching collided spectacularly…

School assemblies can be tedious affairs. All too often teachers stand in front of students and pontificate sanctimoniously about some moral example they have set in their own lives and how students should emulate them in theirs. Quite often, teachers tell students about something that interests the teachers but which students find fascination-free. I am a particularly good exponent of the latter.

Why I thought our students would be remotely bothered about the art of fly casting, I do not know. But it did not deter me from booking a whole week of September assemblies to give a full fly casting live demo. Yes, you read it right. I had decided that students would watch attentively whilst I demonstrated to them how to cast a fly. In the school hall. Three hundred students, and their tutors.

On the Monday morning I was in early to practise. I put a stool on the stage and on the stool I placed an empty plastic water bottle. There was less space than I had anticipated. A cavernous hall felt more like my front room. It was all a bit tricky. But with some improvisation I was soon knocking the bottle off the stool with a well-aimed cast.

An hour later the hall felt even smaller, rammed full of students. I began with the history of the most famous rod makers, Hardy’s of Alnwick – of some interest to an audience of male pensioners from the north east, perhaps, but maybe not to your average 13 year old.

When it came to the demo, I had to get the first five rows to duck down. It was quite ridiculous. I could see my colleagues looking perplexed. What IS the head up to? The students were bemused. At least they were paying attention. They had clearly never seen anything like this masquerading as an assembly before.

The bright yellow fly line fizzed through the air. My first attempt thumped against the stage wall. The second went wide. The third wobbled the plastic bottle. There were oohs and aahs from my audience. I was enjoying my self-indulgence, confident that the bottle would soon be flying off its perch.

I raised the rod again and the line arced above the students’ heads. I launched my arm out towards the stage and the rod jolted out of my hand. It took me several seconds to compute what had happened. The rod was hanging above the parquet floor, dangling next to me. The students were giggling. My colleagues looked away.

The hall lighting is suspended from the ceiling on a frame of scaffolding poles. The fly line had wrapped itself around one of the poles so securely, it took two caretakers and a ladder to retrieve it at break time.

For the rest of the week’s assemblies I explained how to learn from your mistakes. 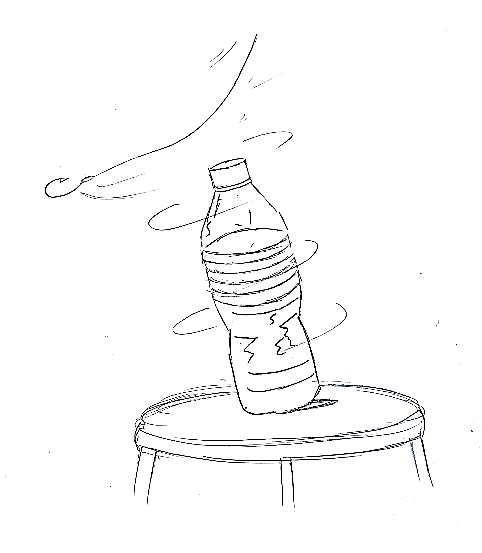